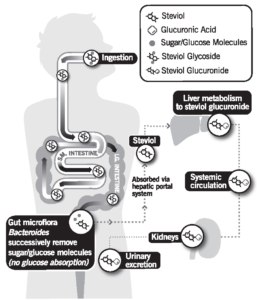 Stevia rebaudiana (Bertoni), a plant belonging to the sunflower family (Asteraceae), is indigenous to South America and cultivated now in many parts of the world. The sweet components within stevia leaves come from a group of compounds called steviol glycosides, which share a common steviol backbone. Carbohydrate residues (mainly glucose) are attached to the steviol backbone in various configurations to form the wide variety of sweet compounds found naturally in the stevia leaf.

To date, more than 40 different steviol glycosides have been identified in the stevia plant. Each of these steviol glycosides has its own unique taste profile and sweetness intensity, which can be up to 350 times sweeter than sugar, but all share a similar molecular structure where different sugar moieties are attached to aglycone steviol (an ent-kaurene-type diterpene).

All 40 plus steviol glycosides have US GRAS (Generally Recognized as Safe) status, have been approved by Health Canada, Food Standards Australia New Zealand (FSANZ), and most recently by the Joint Expert Committee on Food Additives (JECFA). While the European Food Safety Authority (EFSA) is evaluating the approval of all 40 plus, they currently specify the use of 11 steviol glycosides in high purity stevia leaf extracts.

Steviol glycosides are not absorbed intact. Once consumed, they pass through the upper gastrointestinal tract, including the stomach and small intestines, fully intact. Once steviol glycosides reach the large intestine, colonic bacteria remove all of the glucose units, leaving only the backbone, steviol. In humans, steviol is absorbed into the body, quickly modified in the liver, and excreted in the urine as steviol glucuronide.1

Research has shown that there is no accumulation of stevia (or any by-product of stevia) in the body during metabolism.2,3 Recent data indicates both major and minor SGs share the same metabolic fate.4

This was further confirmed in a Nutrition Reviews article looking at the biological fate of various low calorie sweeteners.5 The research shows all of the low-calorie sweeteners are very efficiently metabolized and quickly excreted by the body. While bacteria in the colon do play a role in stevia metabolism, there is no evidence that the amount of steviol glycosides that people consume cause any adverse effects on the gut microflora or gut function of animals fed very high amounts of steviol glycoside during safety testing.

It is a result of this essentially poor absorption in the digestive tract which ultimately contributes to the fact that stevia has zero calories and does not raise blood glucose or insulin levels when digested. It also helps to explain why stevia leaf extract (high purity steviol glycosides) is safe for everyone to use, including pregnant women and children.

The naturality of stevia has been questioned in relation to its processing, with some suggesting that compounds not of the plant are formed as a result of the purification. However, research published in the International Journal of Food Science and Technology confirmed that steviol glycosides are not altered during the extraction and purification process to make high purity stevia extract.6 This was the first study to systematically look at whether the chemical structure or presence of the original steviol glycosides from the stevia plant are affected or modified by the typical commercial extraction and purification processes used to obtain high-purity stevia sweeteners.

The chemical structure of steviol glycosides. 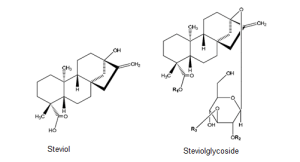 There are multiple steviol glycosides that have now been approved for use including those listed in the table below. Note the formulas and molecular weights vary, as does the conversion factor – this factor allows for the calculation of “steviol equivalents”. Notably, global regulatory agencies have created maximum use limits in their respective safety assessments which are expressed as steviol equivalents to account for the varying chemical structures of the steviol glycosides approved for use. Through the use of this conversion factor, the limits are adjusted accordingly to reflect the molecular weight of each given steviol glycoside.