Where Can I Use Stevia 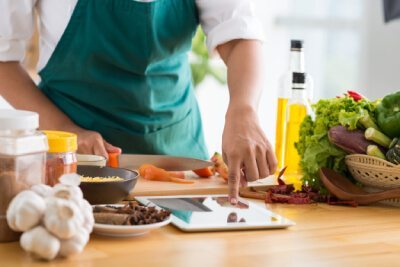 Stevia is a natural alternative to reduce or replace sugar in just about everything. From beverages to baked goods, breakfast to dessert and everything in between, stevia is an ideal choice to add sweet taste to foods you love, all with zero calories. This article will provide buying and usage tips as well as links to recipes to help you reduce sugar without sacrificing taste.

What Type of Stevia Should I Buy?

The stevia that is typically approved for use in foods and beverages, and available for home cooking is high-purity stevia leaf extract which is 200-350 times sweeter than sugar. For this reason, stevia is usually blended with other ingredients like sugar alcohols, dextrose (a mild sweetener made from corn), or plant fibers such as inulin or cellulose. Without blending, it would be very difficult for home cooks to measure out the extremely small amounts of stevia that would be needed in most recipes.

Stevia is typically sold in one-to-one sugar equivalent “spoonable” packages and in single serve packets. The packets are a convenient option when sweetening coffee or tea. Spoonable stevia is great when using larger amounts, but many manufacturer recipes will also include the number of single serve packets needed.

More recently, products that blend stevia with sugars such as white sugar, brown sugar and honey have come on the market. These products provide a partial sugar reduction (usually 50-75%) while still maintaining some of the taste and functional benefits sugar provides. The white and brown sugar blends are great for baking. The honey blends are wonderful for tea, and anywhere you would normally drizzle honey such as over fruit or yogurt.

Not all purified stevia extracts taste the same, and most stores carry several different brands. You may want to try a few until you find a brand and variety which best suits your taste and cooking needs.

How Much Stevia Should I Use?

While many purified stevia leaf extracts are sold as a one-to-one replacement for sugar, some brands and varieties may have different replacement ratios. Most manufacturers include a conversion chart on the package. The section on where to find stevia has a conversion chart you may also find helpful. There may be some initial trial and error to get a recipe to your liking, so play around and experiment to find your ideal level of sweetness.

The most obvious use for stevia is for sweetening coffee and tea, especially with the convenience of single serve packets. In many countries, over 50% of the adult population drinks either coffee or tea daily. The majority of people add a sweetener, milk or cream, or both, resulting in an average daily caloric increase of 69 calories.1 Over the course of a day, many heavy coffee and tea drinkers use their entire recommended daily allotment of no more than 5-10% of total calories from added sugars (about 6-12 teaspoons).2 This is especially true for those who frequent coffees shops where blended coffee drinks can contain more than 25 teaspoons of added sugar.

Stevia presents an attractive alternative for replacing sugar in both coffee and tea. It has a sugar-like taste, and easily dissolves into both hot and cold beverages. Stevia is also a great addition to smoothies, refreshing non-alcoholic beverages and alcoholic cocktails.

Here are some beverage recipes you may want to try:

Cooking and Baking with Stevia

When cooking and baking, stevia can be used to replace some or all of the sugar in most recipes. Since most purified stevia leaf extracts are already blended will other ingredients, you don’t need to worry about adding extra ingredients (e.g., applesauce, yogurt, egg whites) commonly used when replacing sugar. To make things simple, many manufacturers provide online recipes specifically developed to taste great when using stevia.

Stevia has several benefits when cooking and baking. Unlike many artificial sweeteners, stevia is stable when heated at high temperatures. Stevia can also increase sweetness when combined with caloric sweeteners such as honey, molasses or sugar. You may find that stevia can also enhance the flavor of other ingredients in recipes such as vanilla and chocolate.

For many types of recipes, stevia works great to replace 100% of the added sugar. For breakfast, stevia is great in a baked oatmeal or pancakes. It is an excellent choice for creamy puddings and homemade frozen desserts. Stevia is also useful in replacing the hidden sugars found in many foods such as salad dressings, sauces, side dishes and entrees.

When baking, blending stevia with sugar is ideal. As a general rule, it is suggested to include at least ¼ cup of sugar in most sweet baked good recipes. Since stevia does not caramelize like sugar, a little sugar is needed to develop browning. Sugar also helps with the crisp texture of many baked goods such as cookies. For yeast-raised baked goods, such as bread, stevia cannot be used as substitute for the small amount of sugar needed to activate the yeast.

Here are some baking recipes you may want to try: